It’s an aspect of human psychology most readers will already be aware of: optical illusions. As Neil DeGrasse Tyson once pointed out, “an optical illusion is just brain failure”.

People like to trust their perception of what is happening in the world around them but there are circumstances where our perception of an image or set of images can’t be relied on as accurate. An illusion doesn’t have to be optical; we’ve all experienced an earworm, a piece of music, a movie quote or other form of recorded audio, which, once heard, seems to play with vivid realism. An earworm can make a sound seem to play on infinite repeat, often leaving the victim feel plagued by a sound that is not truly there.

Being fooled is a novelty and it can be fun but the video clip below demonstrates how illusions don’t just mess with your eyes(or ears). In certain, often common, circumstances illusory effects can actually modify the way your brain works. In January, 2014, vlogger Tom Scott created a recent video to explain the nature of the McCullough Effect, an optical illusion that can change the way your brain interprets colors in relation to striped patterns.

The video mentions the McCullough Effect can have lasting effects – potentially 3 months. In the interest of remaining unbiased I have not yet experimented but some Reddit users went ahead and tried it with believable results. Try it at your own risk~!

“You couldn’t rub out even half the ‘Fuck You’ signs in the world” ~ Holden Caulfield in J.D. Salinger’s A Catcher in the Rye

It would be difficult to weaponize the principle behind The McCullough Effect because the worm takes several minutes of intentional concentration to take effect. It’s a far cry from Medusa’s statue-creating gaze. Aspects of media can work much faster though. An offensive or upsetting image encountered via social media is often dubbed “cannot be unseen”.  In J.D. Salinger’s A Catcher in the Rye, main character Holden Caulfield laments the human tendency to exploit written language with malice whenever he sees school kids exposed to vulgarity whenever a, “fuck you”, scrawled on a public wall. The illustration below illustrates this point by putting a gratuitous swearword in your head but has another possible harmful-meme delivery system: QR Code 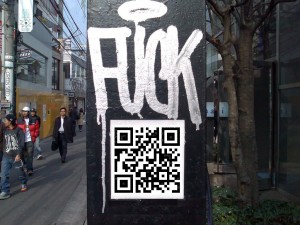 Much in the way you can’t unsee a curse word written in a public space, a day may come when a more complicated curse-like state might be induced via QR code.

In February, 2014, Dr. Nik Thompson of Murdoch University pointed out QR codes can easily be exploited by cybercriminals because they can’t readily be interpreted by humans without the aid of a machine adding, “There have already been cases of QR codes used maliciously to install malware on devices, or direct them to questionable websites.”

Technically, by exploring the idea of exploited QR code, I’m making the same mistake as Diggins and Arizmendi, regarding compromised computer-assisted operating systems as a form of sixth domain warfare, when that would actually count as the fifth domain, cyber warfare. A compromised operating system on a phone or other smart device might seem like your brain is being attacked but the device is the only thing you’d be losing control of.

A truly weaponized piece of media might combine various elements of what I’ve described.  Weaponized information would have to be:

Thanks for reading Can Information be Weaponized? Memetic Warfare and the Sixth Domain: Part Two~! You can go back and read Part One here. Any suggestions, contradictions, likes, shares or comments are welcome.