Mankind had been creating artificial reefs for thousands of years.  Various societies have built underwater structures in order to encourage the development of marine life where a bland ocean floor once stood. Artificial reefs can slow and even reverse erosion, manipulate the waterways for trade or military purposes. In recent times they have been created in an effort to improve surfing conditions.

Artificial reefs are currently promoted as state and city projects in the United States coastal areas as a method of restoring areas previously ruined or damaged by pollution or other human activity.  These reefs are often built out of objects originally intended for other purposes.  There are multiple examples of entire aircraft carriers being sunk in order to catalyze or revitalize and existing reef ecosystem. IN addition to sinking defunct oil rigs, humans have traditionally used rubble, construction debris, and garbage such as old tires. Human activity has in some places ruined the ocean floor but artificial reefs can begin to repair the damage.  Some artificial reefs are started using structures that have been purposefully built  using PVC or concrete. Shipwrecks often form impromptu artificial reefs found preserved on the sea floor hundreds of years after they were lost.

No matter how they were formed, artificial reefs attempts are viable with any structure stable and hard enough for algae, barnacles, corals, and oysters to thrive. The gradual accumulation provides an intricately articulated, natural-seeming ecosystem for assemblages of fish and other sea life. 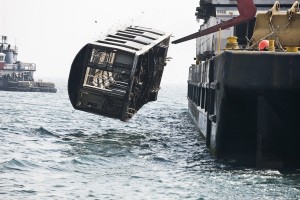 Stephen Mallon‘s photos are sometimes misread as the documentation of an act of pollution or waste. In fact, what is being shown in the above image is an act of recycling, reuse and an attempt to replenish an underwater ecosystem that has been dangerously spent.