Chloé shines in this interview about the future of food design and her upcoming year, including SXSW and developing 3D-printed prototypes into a culinary reality.

Eindhoven University of Technology Graduate, Chloé Rutzerveld, designed a food I don’t quite know how to categorize. I first saw pictures of her most recent work, Edible Growth, last week and immediately wrote to her. Her Edible Growth concept involves a bunch of hot topics in current scientific thought but the pictures don’t put the technology first – they just look great. In fact the pictures are currently the point of the project. There are tons of details that need to be worked out, and Rutzerveld is spending the upcoming year getting the funding, awareness and support to develop this project into a realistic restaurant menu item. 3d printing technology is a frontier she is willing to jump way into. Read more about Edible Growth on Rutzerveld’s website.

Chloé answered a ton of questions below 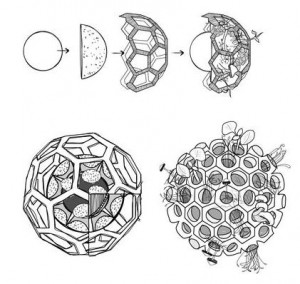 The current concept art looks great. What was the initial idea behind these great looking confections?

The shape of the edible developed and changed throughout the design process, influenced by development in the technological and biotechnological parts of the project. For example, at first, I made drawings of Edible Growth in which the entire ball was filled with wholes. Which doesn’t make sense because cresses and mushrooms don’t grow down, only up 😉 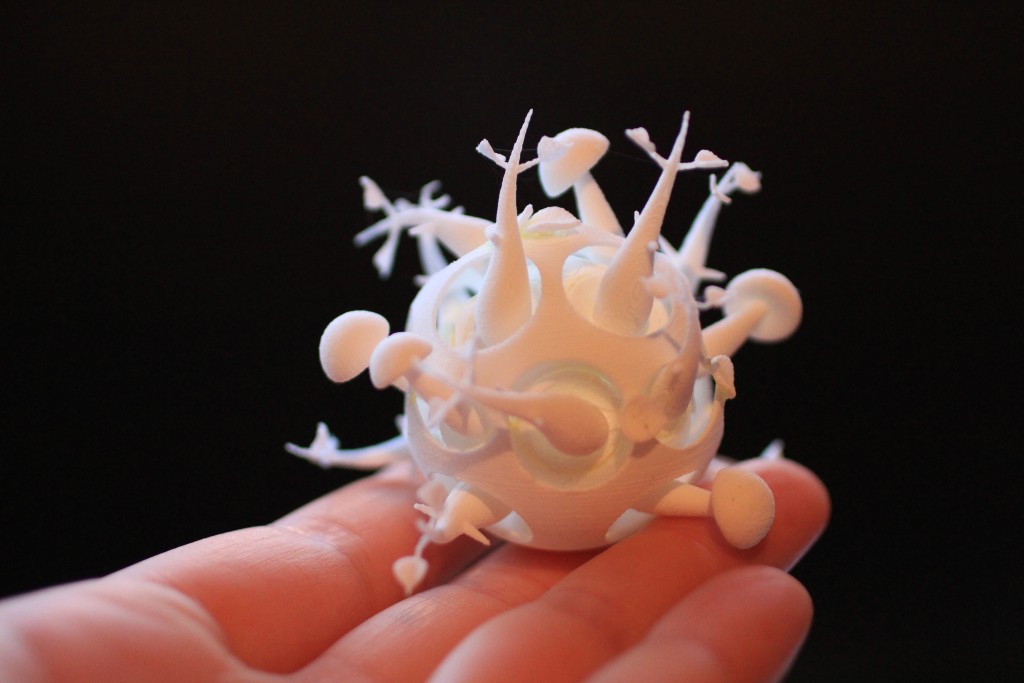 Chloé’s initial, all-plastic design showed plants and mushrooms growing in all directions but the final design with real food had to accommodate gravity with a modified design.

Also, when the product is printed, you see straight lines, showing the technology part.. when the product matures these straight technological lines become invisible by the organic growth of the product. Showing the collaboration between technology and nature. Technology in this project is merely used as a means to enhance natural processes like photosynthesis and fermentation. 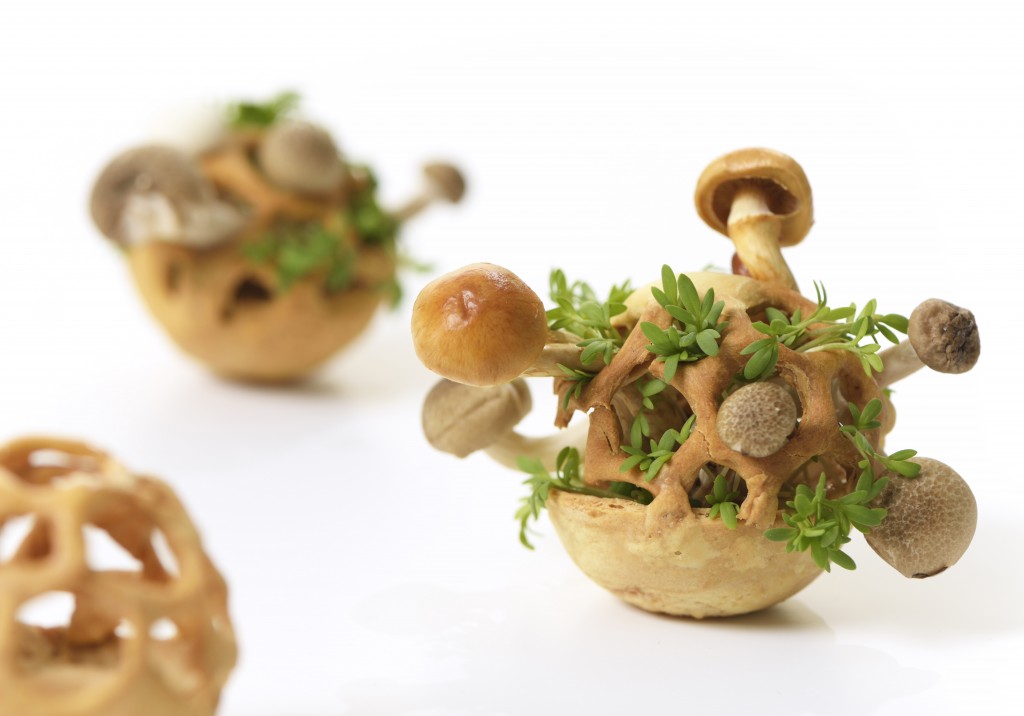 My skepticism towards printing food and the urge to find some way to use this new technology to create healthy, natural food with good a good taste and structure in which the printer would add something to the product, as well as the environment. 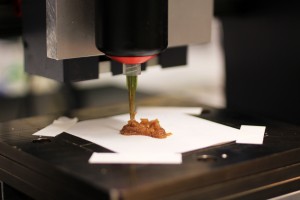 A 3d printer arranges dough for the first step of an edible growth prototype.

Once you had the idea, how long did it take you to produce the prototypes and pastries we can see in the photos?

At first I made a lot of drawings and prototypes form clay. After that I started using nylon 3d-printed structures. When I gained more knowledge about 3d printing and the material composition inside the structure, the design of the product changed along with that. The mushrooms and cress inside the prototypes, as well as the savory pie dough is just a visualization, the final product might be totally different. It’s mend as inspiration and showing that we should think beyond printing sugar, chocolate and dough if we want to use this technology to create future ‘food’.

The prototyping process took about 2 months I think.. and multiple museums asked if they could exhibited it, I made non-food, food products that would last longer. 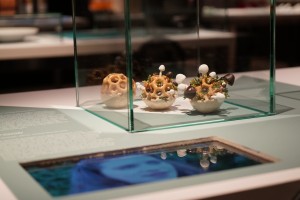 What are you doing for a living?

Haha great question, because as you probably understand, media attention is great but does not help me pay my bills unfortunately 😉 But it does make it easier to get assignments for the development of workshops, dinners etc.

Basically at this point, I give lectures, presentations, and organize events and dinners. One upcoming event I’m organizing is about my new project called “Digestive Food”. I will not say too much about it, but I’ll update my website soon;)

To have a more stable income, I started working for the Next Nature Network in February, to organize the Next Nature Fellow program! Next Nature explores the technosphere and the co-evolving relationship with technology 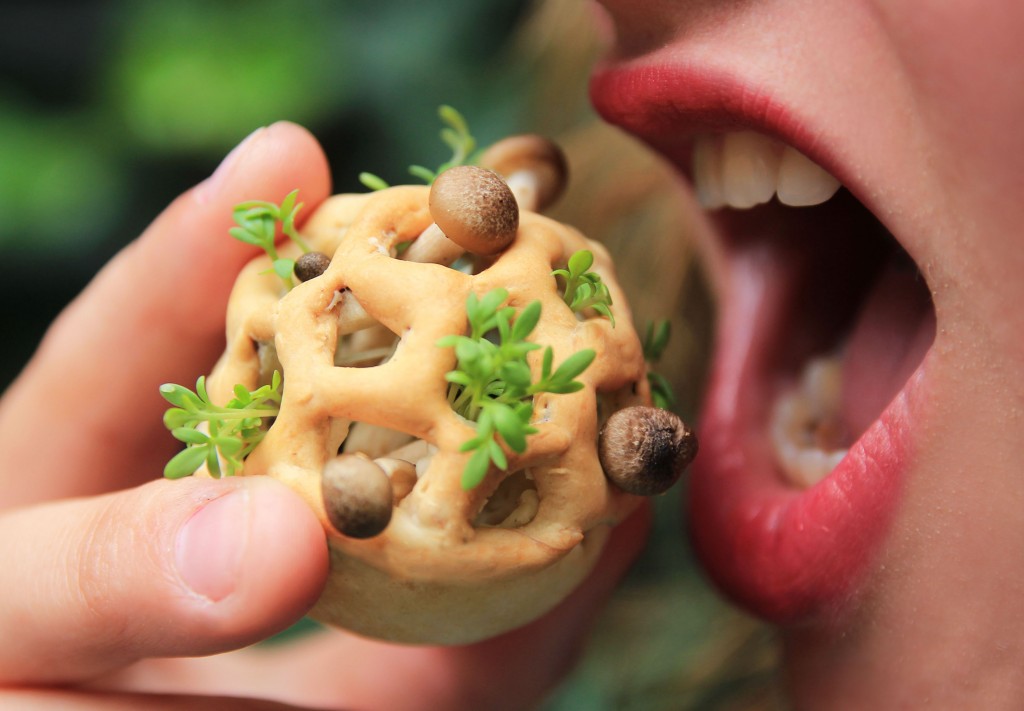 How did you find the project so far?

Well I personally think it looks beautiful and I’m quite proud that so many people are inspired and fascinated by it! It would be great if such a product would come on the market.

I wonder what the pastry and edible soil are made of. Can you talk about the ingredients?

I don’t call it edible soil, but a breeding ground. Because everything must be edible (like a fully edible eco-system) we experimented with a lot of different materials. But in the end, we found that agar-agar is a very suitable breeding ground on which also certain species of fungi and cress (like the velvet-paw and watercress for example) can grow very easily within a few days without growing moldy! 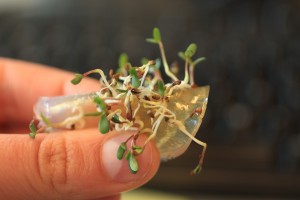 Agar-agar breeding ground turned out to be the right mix of versatility and food-safe materials to make Edible Growth go from plastic prototype to edible reality.

How do you feel about copyright and patented ideas?

I am not very interested in that part.. of course it’s good to get credits for the idea and the photo’s but I will not buy a patent. I don’t have the knowledge or employees to develop this concept into a reel product. So I actually hope someone steels the idea and starts developing it further :)! I’m often asked by big tech-companies or chefs if I wanted an investment to develop it… but to be honest.. I’ve many other ideas and things I would like to do. 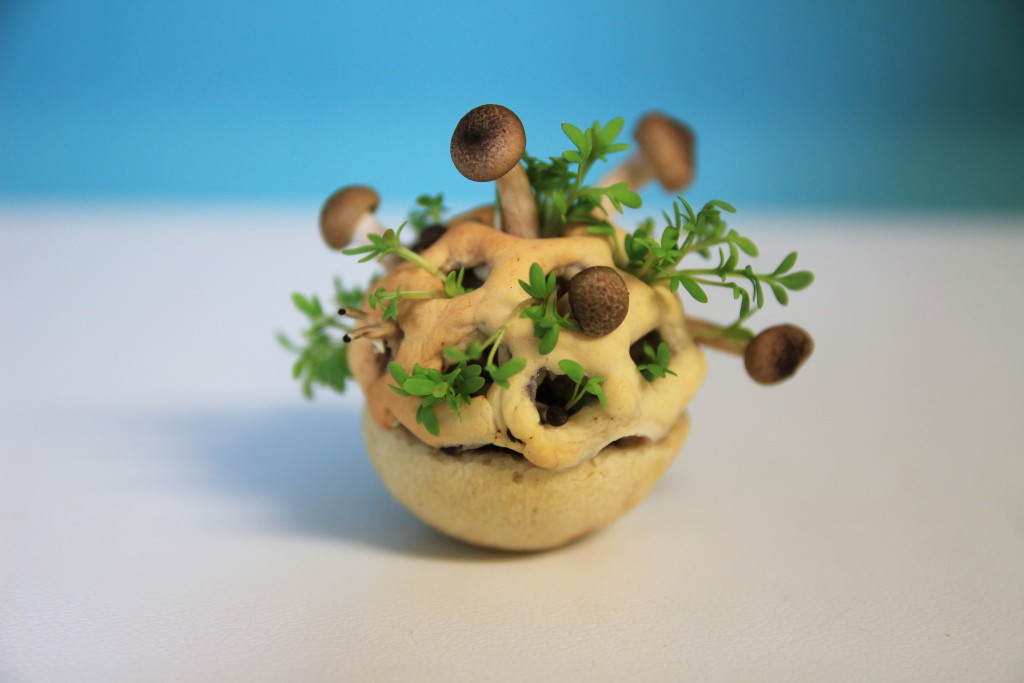 Do  you have secret ingredients?

Haha not in the product, but in my work it would be passion, creativity and a pinch of excessive work ethos 😉

What types of foods have you experimented with?

For Edible Growth? A dozen of cresses, and other seeds, dried fruits and vegetables for the breeding ground, agar-agar, gelatins, some spores..

But for my other projects also with mice, muskrat, organ meat, molecular enzymes etc.

Who have you been working with?

I actually still live in a huge student-home which I share with 9 other people. But because I almost graduated one year ago I will need to move out. So I work a lot at home, in my 16m2 room, in the big-ass kitchen downstairs,  if I have appointments somewhere I afterwards work in a café or restaurant with wi-fi, or at flex work places, my parents house.. I’m very flexible and can work almost everywhere 🙂 Practical work I’ll do mostly at home obviously.

But I am looking for a nice studio in Eindhoven, that’s easier to receive guests or people from companies.

I noticed on your website you have other projects in the works. What are you doing currently? What are your upcoming plans and goals for 2015?

Next week I’ll go to SXSW. In the summer I’m going to Matthew Kenney Culinary academy to learn more practical and theoretical things about food (and secretly just because I absolutely love to learn about plating and menu planing). I’m developing this event I told you about for the Museum Boerhaave in Leiden and the E&R platform. And when I return from Maine, I actually want to set up a temporary pop-up restaurant at the Ketelhuisplein during the Dutch Design Week 2015 about a social or cultural food issue.

Thanks again, Chloé~! This was fun!!!