Neuroscience is an exciting young field where the emerging applications are going through a unique experimental phase that show commercial promise but also render it susceptible to pseudoscientific claims. Cosmoso attempts to sort the facts from wishful thinking by examining a few aspects of BCI(Brain Computer Interface), including prototypes and outrageous claims. 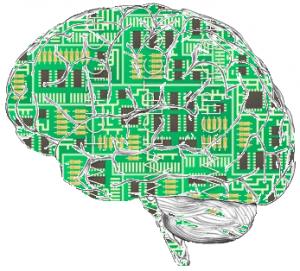 Billions of polarized neurons maintain waves of electrical charges inside your head, stimulating each other with electrical impulses. Over a hundred years ago began a storied history of the EEG machine, able to monitor and prove the existence of electric brain waves. EEG machines were used to further many aspects of brain science from the significance of REM sleep to screening WWII pilots for dangerous brain seizures. Honda has been working on using the brains recordable brainwave output to control robotics and eventually vehicles.

EEG machines have been around in their present form for a few decades. EEG measures the oscillation of electrical activity in the brain and those measurements can be controlled by the owner of that brain & thus used to operate machinery.

The general idea: residual electrical activity caused by your brain can be measured on the surface of your scalp, neck and face. That data can change based on what the brain is consciously thinking. By controlling your thoughts in a certain way you can change the way the brainwaves show up in an EEG reading, and that info can be used as an input method to control various machines. A variety of commercial enterprises attempt to exploit the concept, to varying degrees of success or usefulness.

Neuroscientist Jared Horvath, at the University of Melbourne, in Australia, recently debunked pseudoscience that has spawned a popular youtube trend: transcranial direct current stimulation (tDCS). Proponents of tDCS claim cognitive and behavioral benefits that enhance the brain’s ability to problem solve, learn, do arithmetic, utilize visual ability, and complete memory-based tasks. Much of the research he found was not able to be replicated by other researchers, or not attempted to be fact checked or peer reviewed. He also discovered a lot of experiments did not run a  “sham condition” control group — wherein test subjects were attached to the device that had no live current. In fact, despite the legions of DIY supporters hoping they found a new way to manipulate their own brains, Horvath said, “When I pulled out the 20 studies looking at tDCS and working memory, for example, they all found something, but they all found something different.” http://spectrum.ieee.org/biomedical/ethics/brain-hackers-beware-scientist-says-tdcs-has-no-effect

Roi Cohen Kadosh, a neuroscientist at the University of Oxford, is quick to point out that tDCS might not be nonsense, because: “This is still a young field of research so we still need to be really careful when we interpret the results from tDCS. The real results will come when we have enough data to make meaningful conclusions.”

If there turns out to be legit, predictable aspects of tDCS, it opens the possibility of a brain-computer interface being a 2-way street. The current tech allows EEG to measure brainwaves as user output but the input back into the user still has to be audio or visual. If there is really something to find in tDCS studies, we might eventually be able to have our brains communicate directly with a computer via electric impulses.

The science behind brain manipulation is not developed enough for these products and experiments to work as claimed. Youtube has provided a ton of anecdotal evidence, though, and you can have fun going down that rabbit hole if you want. It’s basically not possible at the time I’m writing this, in early 2015, to know where to place electrodes or how much current to use. http://www.foc.us/ provides a device that claims all types of unscientific  benefits.

From game controllers to helicopters you can control a variety of toys and games with your thoughts. It’s a fast-growing field but when the interface becomes 2-way, there will likely be a major leap forward.