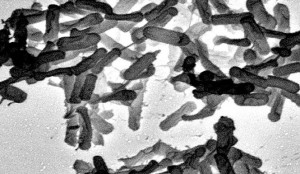 Ok, so let’s zoom in on the gross for a second so I can give you some specific background about poop transplants:
Some people can’t handle this topic and to them, I apologize. As of June 17th, 2013, the FDA decided to allow fecal matter transplants for recurrent bacteria Clostridium difficile, which is a gastrointestinal problem with symptoms like life threatening diarrhea, severe cramping and dehydration. Against C. Diff., fecal transplants have a 91% success rate. This promising treatment might be able to combat a variety of gastrointestinal diseases related to probiotics and the balance of microbial life in the human gut. Right now you might be imagining something really gross and I can’t exactly assuage your fears but when I researched the process, I was marginally reassured that the fecal matter is “rinsed and strained” um, ok, and then administered rectally or orally in pill form. It’s kind of like asking where hotdogs come from.

A new case study about fecal matter transplants shows a possible link between gut flora and obesity which has far reaching implications for treatment of obesity and other gastrointestinal disorders. Some scientists and medical professionals already seem convinced but how related is your gut fauna to your body weight? Emerging research on the practice has shown gut bacteria to be linked to several surprisingly diverse aspects of human physiology. If this is a new topic for you, check out Jeroen Raes’ compelling ted talk on the subject.

In the above video, Jeroen Raes is very convinced of the efficacy of biotic treatments and the influence of microbial life on human health. In its current practice and form, can FMT cause obesity? If you are desensitized enough to examine a case study I can move on to explain where the obesity comes in.

Last November(2014) a woman‘s C. difficile infection was successfully treated by fecal transplant. After receiving the transplant, the patient experienced rapid weight gain to the tune of 34 pounds in 16 months. The donor was also overweight, yet the recipient had never had any problem with fatness prior to the FMT.  Open Forum Infectious Diseases has a long and detailed argument from active people in a variety of related fields,  if you want to see the debate unfold. Spoiler alert: there is not enough evidence to know for sure that the gut bacteria transplant or a related aspect of FMT caused the obesity.

After going through a variety of antibiotic treatments, the woman kept being reinfected because, the theory goes, her fecal bacteria was out of balance. After what was probably a pretty miserable few weeks of unsuccessful treatment the woman’s medical team at Newport Hospital in Newport, RI, decided to give fecal transplant a try.

Before the FMT treatment, the patient was at a healthy weight, 136 lbs with a normal BMI of 26. Her daughter, the fecal donor, weighed 140 lbs at the time, with a BMI of 26.6. In the weeks after the transplant, the daughter actually gained some weight, too. Recurrent infections ceased and the transplant appeared to be a success.

So, sixteen months passed and the fecal transplant recipient experienced a weight gain of 34 pounds, making her now technically obese. After going on a closely monitored exercise and diet program she still kept the weight on over 2.5 years later.

The author of the case report, Colleen Kelly, said, “We’re questioning whether there was something in the fecal transplant, whether some of those ‘good’ bacteria we transferred may have an impact on her metabolism in a negative way.”

Some science blogs are reporting this as a strong link to argue fecal matter can cause weight gain, and the case study is certainly compelling, but until further study is done we can’t be sure. It’s worth mentioning, though, that the association between gut bacteria and body weight has already been extensively theorized. A few animal studies seem to show FMT from a fat mouse to a normal-weight mouse may be related to a significant increase in fat in the recipient mouse. It’s not exactly a settled issue, though, with several possible factors which could alternatively explain human weight gain.  Gut flora may influence less direct aspects of body weight, like an increase in appetite. In fact, an increase in appetite may have just been a sign the subject in the case study beat the infection. To complicate the debate further links between H. pylori treatment and weight gain have been demonstrated in case studies that don’t involve fecal matter transplanting. The reason this case is so convincing is partly because the daughter and the mother both gained weight in conjunction.

The verdict? While the researchers conclude the FMT was partly responsible for the recipient’s obesity, I found the science inconclusive. I’ll definitely be keeping an eye out for new info on this most scatological and potentially very important debate.