It makes for a sensational headline but NASA didn’t even come close to discovering warp technology.

The mechanism behind their fuel-free propulsion has no clear link to warping space-time. In fact, space-time is not proven or understood to exist as a material substance able to warp. It’s all nonsense. So what really happened?

Richard Feynman once said: “The first principle is that you must not fool yourself – and you are the easiest person to fool.”

You should have been suspicious when the story made the rounds on social media. The headlines were claiming NASA successfully tested something called the EM Drive. The EM drive is awesome, and it’s real science. It’s a propulsion engine doesn’t use propellant, which seems to violate the laws of physics by creating a reaction with no initial action.

First, let’s examine the actual finding. NASA has developed a hollow device that can be  pumped full of electromagnetic radiation which reflects back-and-forth, tapped inside the chamber, generates thrust, causing the device to accelerate in a direction based onthe shape of the chamber. You might ahve seen the story or similar reports over the last year because iterations of it have been built by Roger Shawyer (the EM Drive), one from a Chinese group led by Juan Yang, and one from Guido Fetta (the Cannae Drive), all claiming successful thrust. The stories on science news sites claim the acceleration created is caused by warped space of an Alcubierre Drive, the completely fictional “Star Trek” design.

Here are some problems. First off, none of the tests showed results from gadations in power. If this is a viable prototype for an engine, the science behind it hasn’t proven why a tiny acceleration in relation to a huge amount of relative power is worth any sort of real consideration for space travel. It’s a weak engine with no sign of how it can be scaled.

Secondly, the thrust they created is so small it might just be a mistake in mathematics or caused by an unknown factor, unrelated to warp tech. A true test requires an isolated environment, with atmospheric, gravitational and electromagnetic effects removed from the equation.

Thirdly, good science is reproducible. These tests lack a transparent design so no one else can verify that this actually works.
Finally, a real report has to be created that can be peer-reviewed and understood before irresponsibly publishing the claims.

Optimism of this sort, claiming to be able to put people on mars with a warp engine, is not scientifically valid. This latest group declared they have broken the previously-held laws of physics. They assume we can scale up and implement this engine for space propulsion just because of some questionably positive results. They claim to be distorting space, they claim they might be causing light to go faster by approximately 10^-18 m/s. They made these claims without actually proving them, and told the general public, spreading misinfo.

Harold “Sonny” White at NASA, has made extraordinary claims about warp drive in the past. He is totally the kind of guy who would jump to warp drive as a conclusion. There is nothing in NASA’s report that shows they’ve created a warp drive. Sorry, Star Trek and Star Wars fans. Most likely this is a public relations move to get America and the world science communities more excited about space travel and science education.

Chirality is a state of not being able to superimpose over its own mirror image. Anything can be chiral, as long as it is asymmetrical along more than one dimension.

Different forms of chirality can be confirmed and used to prove the existence of at least three spacial dimensions.Underlying all of physics is chirality. Without context to anything but itself, there is a universal direction to every dimension. Asymmetry is found everywhere in the natural world.

Quantum physics is riddled with asymmetries like the noteworthy fact that neutrinos all spin the same direction.

The most common usage of the word chirality is in chemistry, where some molecules can’t be  superimposed on their own mirror images. Chiral molecules have more complex properties and can often only operate in cellular life in a narrow context, making them trustworthy and predictable.

Because we function in three-dimensional space, objects must have chirality along multiple axises in order to be truly chiral. Most things easily fulfill that caveat but the official definition is slightly flawed in light of three dimensions. Often, the definition mentions a mirror image that can’t be superimposed but if something were only a mirror image it could be flipped in a third dimension and once again be superimposable. People use the example of left and right hands to describe chirality but that example works because hands have a palm and a back, in addition to mirroring left and right. That said, the etymology of the word chirality is derived from the Greek word for hand. Snail shells, spiral galaxies, and the DNA helix are must have more than one axis of asymmetry to be truly chiral. Another way of saying this is that chiral objects or systems have no symmetrical center in any dimension.

Chirality is  Huge Part of the Synthetic Drug Market 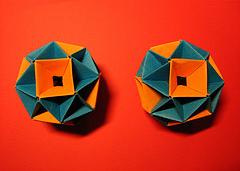 These origami structures are worth a thousand words. They possess opposite chirality. No matter which way they are turned, the pattern will never twist in the same direction for both objects, yet they are in pattern, ratio, color and mass identical.

Many, many molecules are chiral. Whether it is found in nature, synthesized by the human body or created in a lab, a lot of effective, powerful drugs can be analyzed and synthesized with the opposite chirality, creating often times similar drug effects – under a brand new copyright. Drug manufacturers can often times remarket a similar or even better drug without worrying about generic drugs.

There are several ways which chirality manifests in particle physics. Neutrinos only spin left~! Well, “left” isn’t exactly the right word but neutrinos posses a chirality of shape and then only spin in one directions relative to that shape – the only object in the known universe to spin this way. Neutrinos are hard to come by, and usually found as stand alone particles when emitted via radioactive decay or a nuclear reaction, such as the sun. There may be an anti enutrino particle that spins the other way but it has not been discovered. Neutrinos are only affected by the weak subatomic force, and pass freely through matter.

It’s hard to imagine higher dimensions. Even one additional spatial dimension is hard to see with your inner mind’s eye. If you want to imagine six, seven or eight spacial dimensions it isn’t just hard – no one’s even truly conceptualized hyperspace. It’s what makes the subject compelling but also what makes it frustrating to talk about. The examples theorists are able to use to help people “visualize” what can’t be seen must work within human limitations, and are thus second and third dimensional examples of a higher dimensional concept or object.

“Wait a second,” some of you are wondering, “Isn’t TIME the fourth dimension?”
This article is about spacial dimensions only. Personally, I agree with Amrit Sorli and Davide Fiscaletti’s work which I feel adequately proves that time is NOT a spacial dimension. If you want to debate this issue further, you can read my reasoning in my follow up piece, Time: fourth dimension or nah?, also available on Cosmoso.net

One of the most basic exercises in multidimensional theory is to imagine moving in a fourth. The distance between you and everything around you stays the same but in some fourth dimension you are moving. Most people can’t truly do this imagination game because there in nothing in our three spacial dimensions to compare the experience to.

In the famous book about spacial dimensions, Flatland, living, two-dimensional beings existed in a universe that was merely two dimensions.  A being with three dimensions, such as a sphere, would appear as a circle able to change circumference as it moved through a third dimension no one in flatland has ever conceptualized.

Humans evolved to notice changes in our three-dimensional environment, inheriting our ancestors ability to conceptualize space in three dimensions as a hardwired trait that actually stops us from conceptualizing other aspects of reality that might nonetheless  exist. Other people see hyperspace as a theoretical construct of mathematics that doesn’t describe anything in reality, pointing to the lack of evidence of other dimensions.

A Tesseract. Many people in the advanced math classrooms of my generation of high school students struggled to wrap their heads around tesseracts without moving diagrams. If a picture is worth a thousand words are we talking animated gifs and words used to describe three dimensional space or should we make up a new saying?

It’s kind of like imagining “one million”; you can prove it mathematically to yourself, you can count to it and you know how valuable it is but you can’t truly picture one million of anything. Trying to explain this conceptualization problem with words is pretty tough because your brain is not equipped to handle it. Humans try to wrap their minds around it and dream up ways to explain hyperspace to each other anyways.

A rubix cube is particularly compelling as a multi-dimensional teaching tool, because it puts spacial dimensions in the abstract in the first place, and then gives the cube the ability to change the dimensional orientation of a third of it’s mass. It’s hard to wrap your head around a normal three dimensional rubix puzzle. By adding another dimension and using the same principle, one can ALMOST imagine that fourth spacial dimension. Most people can’t solve a three dimensional Rubix puzzle but if you think you are ready for the fourth dimension, you can download it and play it on your two dimensional screen, here: Magic Cube 4D

If you don’t think you’re ready to try and solve that puzzle but you want to know more you can watch this roughly 1/2 hour video about it:

While Miegakure is still under development, it’s set for release in 2015. Interactive games like this can spur collaborative thinking from a larger pool of collaborators – and make game developers tons of money.

If you want something a little less abstract than Rubix, check out this prototype for Miegakure, the surreal PlayStation 4 game that lets the user explore a four dimensionally capable world through three dimensional spaces that connect to each other through higher dimensions. It’s a great idea that makes everyone have the initial thought of wondering how the heck they coded it. Then the idea sinks in and you realize they wrote the code first and played with the visual manifestation as they went. It’s a great metaphor for the idea in the first place; begins as a concept rather than an observation. The essence of the argument against hyperspace actually existing is the lack of physical evidence. Unlike a ghost story or a spiritual, religious attempt to explain the supernatural, there is actually mathematical evidence that seems to make higher dimensions possible. It has logical evidence as opposed to empirical data. There are ways to observe without using human senses but it’s difficult to prove an observation of something the majority of humans have trouble even seeing with their mind’s eye, so to speak.

One day we might be able to use technology to increase our understanding of this abstract concept, and manipulate an entirely new kind of media. For now we are stuck with two and three dimensional visual aids and an mental block put in place by aeons of evolution.

Read More about Hyperspace on Cosmoso.net~!