Will 2015 be the year a product augments our vision with enough mass appeal to live up to the hype of the last decade?

Neither science fiction and nor market speculation has ever been able to truly predict what will happen in tech markets. It’s one of the many things that make it such an exciting field. The public imagination hasn’t given up on the idea and developers are still rooting for marketable hardware to come out. Last November saw the last of the major software developing cliques give up on Google. They didn’t end up being christmas gifts or product placements in the latest flicks. They came in with a bang but immersive tech is currently whimpering.

So, what happens next?

There are several factors that have to be in place before the next generation of smart glasses sweep the nation.

Smart glasses have to be inconspicuous and stylish. All functionality aside, this is just something that has to look cool. There is nothing about google glass that gave the users any sort of option to accessorize or make the look their own. I’ve been quoting Neal Stephenson’s Snow Crash a lot lately but this is just too appropriate for me to restrain myself:

Gargoyles represent the embarrassing side of the Central Intelligence Corporation. Instead of using laptops, they wear their computers on their bodies, broken up into separate modules that hang on the waist, on the back, on the headset. They serve as human surveillance devices, recording everything that happens around them. Nothing looks stupider; these getups are the modern-day equivalent of the slide-rule scabbard or the calculator pouch on the belt, marking the user as belonging to a class that is at once above and far below human society.

The point is, people want to be able to look not just normal but cool while wearing smart glasses. They don’t want to look like these gargoyles: 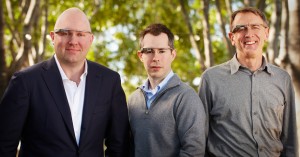 Although, most of us wouldn’t mind having the paycheck that goes with being this geeky.

The closest thing I could find to incospicuous is Innovega. The hardware side of immersive tech could just become invisible – or at the very least less noticeable. Innovega has the right idea with almost-normal looking wearable sunglass looking things, prototyped last Spring at the 2014 International Consumer Electronics Show in Las Vegas. Chief executive Steve ­Willey says the real goal of Innovega is a consumer contact lens. Aspects of their product line are seeking approval from the U.S. Food and Drug Administration in 2015.

Other companies, like startup Imprint Energy, could come up with battery solutions that allow the power source to hold  charge for longer and mold to the shape of various frames in different styles. Imprint’s zinc-based batteries are less bulky than lithium-ion, and less volatile. Perpetua Power is working on a battery system that recharges from simple body heat.

Speaking of heat, a lesser publicized but widely held complaint about Google Glass was that the device heats up to almost unsafe levels, even from expected levels of use. Check out uxbooth.com’s review:

Upon performing certain computations, Glass heats up to levels that border on unbearable for users (50°C/122°F) after just a few minutes. We discovered the issue while testing an application we developed for warehouse workers, which enables the user to scan barcodes on the go and fill in delivery information with voice input. The heat became noticeable after the application’s launch and reached its peak while scanning the barcodes. Thankfully, we discovered a solution to the problem, which also improved the usability of our application.

So, investors are losing money and the next big breakthrough in immersive tech hasn’t broken through, yet. GoogleGlass now sells on eBay for as little as half list price.