Kennedy isn’t the only prominent vaccine denier but he’s the current media darling for whatever reason. After several hints in the past about vaccine paranoia,  Maher took it to the next level and had a notable anti-vaccine conspiracy theorist on the show for a one on one interview. His normally pro-science stance and no-bullshit interview style was strangely abandoned and at one point Maher himself actually went on an anti-vaccination rant, falsely claiming the anit-vaccination crowd has some kind of legit point. I’ll unpack the rant after the video, below.

“Why can’t we have a kind of grand bargain on this?”

Because a lot of people will die, many of them children, if we don’t act appropriately. The anti-vaccination rhetoric isn’t just easy to fall for, it’s catchy. People hear the soundbites and repeat them, or share articles off of persistent tabloid sites that feed off of the traffic it causes. Spreading false or controversial medical data isn’t without it’s consequences.

“It just seems like we’re calling each other kooks and liars.”

That’s because spreading fear about vaccines is a kooky lie, since there isn’t any data supporting the accusations that vaccines are dangerous. That’s crazy, and if you participate in the lie, you are, in fact, lying. On other subjects, like, say, Climate Change Denial-ism, Bill Maher would be first in line to tell an anti-science arguer they are being crazy or outright lying. The point is that the pro-vaccine side of the debate has an abundance of reliable data supporting it’s efficacy- so much that neither Maher nor his guest tried to make a case that vaccines don’t work. Vaccines aren’t just safe, they are saving people from untimely, rather unpleasant deaths. Denying that is kooky at best.

“It seems like common sense that vaccines, even thimerosal, probably don’t hurt most people — if they did, we’d all be dead, because they’re in a lot of vaccines that we all took — but some do.” 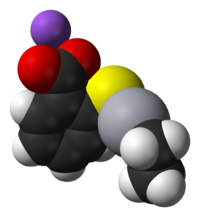 Saying Thimerisal “contains” mercury is like saying table salt contains a dangerous explosive just because one of the atoms in the molecule is sodium. Sodium explodes violently on contact with water. Is there an anti-table salt movement? nope.

It’s hard to even follow this because Maher’s conversational grammar is confusing. His grasp of the topic isn’t really demonstrated. It appears he thinks thimerisal is the name of a vaccine. Or maybe he left some words out? It’s hard to decipher a position that is illogical and wrong in the first place.

Marketed under the trade name Merthiolate, Thimerisal can be used as a preservative in vaccines. It has several other uncontested uses: immunoglobulin preparations, skin test antigens, antivenins, ophthalmic and nasal products, and tattoo inks. European Union, and a few other countries freaked out about it after an erroneous report of its link to autism back in the 1980’s. The current scientific consensus has repeatedly assured the public that it isn’t dangerous but the rumor of mercury poisoning and other ailments has persisted.

Obviously some minority gets hurt by this stuff.

Uh, no, actually it’s not obvious. What stuff? Thimerisal? Vaccines in general?

I don’t understand why this is controversial?

Why we have this emotional debate about something that– there is science there.

No, There is no science supporting the anti-vaccine side. None.

It astounds me that liberals, who are always suspicious of corporations… and defending minorities, somehow when it comes to this minority that’s hurt…

It’s not about corporations. Liberals want people, including corporate entities to behave ethically. In this situation, the unethical behavior is not on behalf of a corporation. Secondly, there is no wounded minority. No one is getting hurt. Just the opposite.

It’s like, ‘You know what? Shut the fuck up and let me take every vaccine that Merck wants to shove down my throat.’

No, it’s not like that, obviously. If there was any alarming study demonstrating a dangerous aspect of vaccination the anti-science vaccination deniers wouldn’t be able to tell. It’s like the boy who cried wolf. By putting anti-vaccination talking heads on tv and lending legitimacy to their wolf-cries, Bill Maher is helping to confuse the general public. Bill Maher references a vague minority that doesn’t actually exist. There is no evidence of anyone being hurt by vaccines. Liberals might defend oppressed minorities but there general public, the mainstream are the ones being threatened by a dangerous minority opinion in this case.  If liberal America impartially stood up for all minorities, they would be defending climate deniers and Ku Klux Klan members. The fact that the anti-vaccine rhetoric has to put words in an imaginary opposition’s mouth should speak for itself.

I’m surprised Bill Maher took this position but he did hint at it last February, when he told guests and audiences he’s an “anti-flu shot guy” and has a problem with anti-vaccinators being told to  “shut the fuck up” and “don’t ask any questions.” It might be appropriate to tell someone in a crowded theater to shut the fuck up if they keep yelling fire, or persistently asking the audience if the theater is on fire despite no smoke or alarms. Yelling fire is dangerous and gives people wrong information that may lead to a percentage of the hypothetical crowd being injured or killed in the ensuing panic.

Back in February, Real Time guest Marianne Williamson, agreed with Maher and objected to anti-vaccination supporters being called “anti-science” or “kooks”, which is silly because it is a blatantly anti-science position and that makes it pretty kooky to give it airtime.

Perhaps best continuing the train of thought from the 1990 philosophical classic, A Natural History of the Senses by Diane Ackerman, Sight and Sensibility is an exploration of the brains ability to adapt to the human sense of sight, and a strong argument for environmental factors being able to drastically shape our sense of sight. Laura Sewall is a self-described ecopsychologist, and her book’s argues that a reevaluation of the way modern man sees the natural world can drastically improve the way we fit into it.
There was a surge of renewed interest in environmentalism in the late 90’s. Sight and Sensibility found a strong audience response from people who believed the natural environment and the the human psyche are – or at least should be intertwined. IN he face of the natural world’s undeniable, wholesale degradation ecopsychology formed as an academic field. The best people to tackle humanity’s reintegration into the natural world are surely scientists, the movement posited, and ecopsychology was a term combining the science of the human mind and science of the natural world.

Laura Sewall, Ph.D., was one of my favorite ecopsychological pioneers. She is had already devoted her studies to physical and psychological visual processes and the leap to ecopsychology is enjoyably documented in this entertaining, surprisingly quick read. By combining these traditionally distant fields, she poses a comelling case that the sense of sight is not just a player but indeed the key to undoing decades of ecological devestation. Sight and Sensibility– is the earliest book I could find to use the term ecopsychology. It is especially useful for explaining the philosophical heart of scientific environmentalism.

The book uses examples from the author’s own fieldwork regarding visual predicaments, attitudes, habits and behaviours of wild baboons with personal observations from deep in the African continent. She expresses some excellent research about the evolution of human sight. Sewall also examines efforts from the psychological community to teach or reteach vision improvement.  Finally, the captures several, varied cultural examples of different ways of using vision. She shows how we can restructure the neural networks that determine how we see, awaken to visual patterns and depth perception, and learn to see more of the world around us.
Sight and Sensibility at Amazon.com

Check out further reading on the subject:

Diane Ackerman’s A Natural History of the Senses(1990)